It started, as many new GovIntranet features do, with an idea from the Department for Digital, Culture, Media and Sport. The internal communications team wanted a way for staff to post recognition and praise for other members of staff on the intranet.

The new intranet template was originally known as the “Honours Wall”. A place where staff could post shoutouts and virtual high fives under a selection of categories that aligned to the departmental objectives. It was a clever idea to promote what people were doing within the department and to show how this benefited the overall objectives of the department.

Before the initial launch, I thought that this would be an innovation that either bombed or took off. It took off. Like watching a patchwork quilt being made, within days, the wall was filling up with posts. Thanks for going the extra mile to meet an urgent deadline, thanks for doing a wonderful lunchtime presentation, thanks for being a shoulder to cry on.

Since the initial launch on the DCMS intranet, other clients have commissioned the wall, and over various iterations, it’s become known as The Wonder Wall. I even have a government purchase order for a “Wonder Wall”, which is rather amusing.

Instead of using departmental objectives, other government departments have used different names for categories such as “Fabulous Friend” and “Unsung Hero”. The wall is a perfect example of engagement and recognition on the corporate intranet.

Like Facebook, if staff are mentioned on the wall, they’ll receive an email notification inviting them to view the wall entry and encouraging them to post. The wall template (one demo wall entry shown below) lists entries in a vertical timeline, displaying coloured icons for categories, which can be filtered. A homepage widget highlights recent wall entries on the intranet front page, enticing staff to visit the wall. 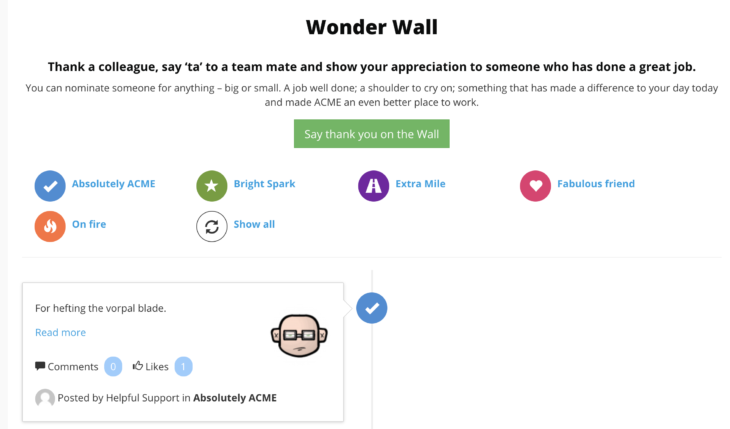 There is a fair amount of work required to build the wall. The templates integrate with the intranet staff directory profiles, and custom Gravity Forms are required to allow staff to post entries. Bespoke code automatically loads lists of employees and teams. And we’ve built tailored email messages.

Other clients who do not use the integrated staff directory have built their own walls using other GovIntranet templates or existing WordPress features. One client uses a simple method of WordPress comments to allow staff to post entries. Another client has used the “Hashtags” template to display a grid of posts that have been tagged as #wonderwall via an online form.

The uptake for this feature has been very positive. The “Wonder Wall” areas on client intranets contain pages and pages of entries. As an outsider, reading the wall entries has opened my eyes to both the breadth of work and the acts of human kindness that goes on within departments.